‘Leave mummy alone’: Dramatic moment a mother protesting against COVID-19 lockdown is arrested in front of her screaming son before the distraught child is pulled off her 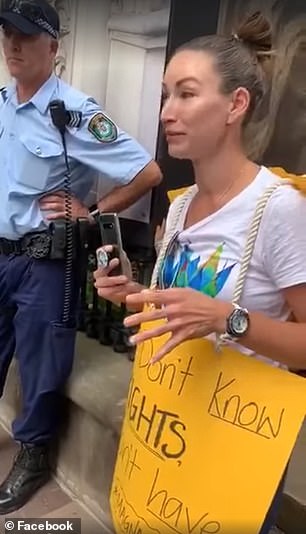 A mother has been pulled away from her screaming son as she was arrested for protesting ‘for her rights’ during the coronavirus pandemic.

Video footage shared to Facebook showed the woman speaking with police officers near Parliament of New South Wales in Sydney’s CBD about 3.50pm on Saturday.

The woman, who was with her son, wore a yellow sign that read: ‘If you don’t know your rights, you don’t have any. Magna Carta.’

The woman told police she was not doing anything wrong, despite the government’s social distancing regulations implemented during the health crisis.

Australians are allowed to exercise outdoors but must keep a 1.5 distance from others.

‘I don’t know how you guys are going home in honour tonight and trying to infringe me with a notice which I don’t consent to because we’re doing nothing wrong,’ she told the group of officers.

‘You guys should be here holding the signs with us, defending us. I don’t consent to what you’re doing.’

The woman said she was not ‘acting in aggression’ and that she did not consent to sharing her name.

She asked if police she was ‘under arrest’ and female officer explained they were ‘asking for her name’ as they believed she was committing an offence.

The woman then appeared to walk on.

Additional video footage showed the altercation took a turn for the worst.

Police attempted to arrest the woman, while her son screamed and cried.

‘Mummy is not going,’ he said. ‘Leave mummy alone.’ 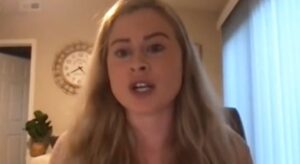 Exposed: Nurse Tells All About BS-19 Politics in US Hospitals