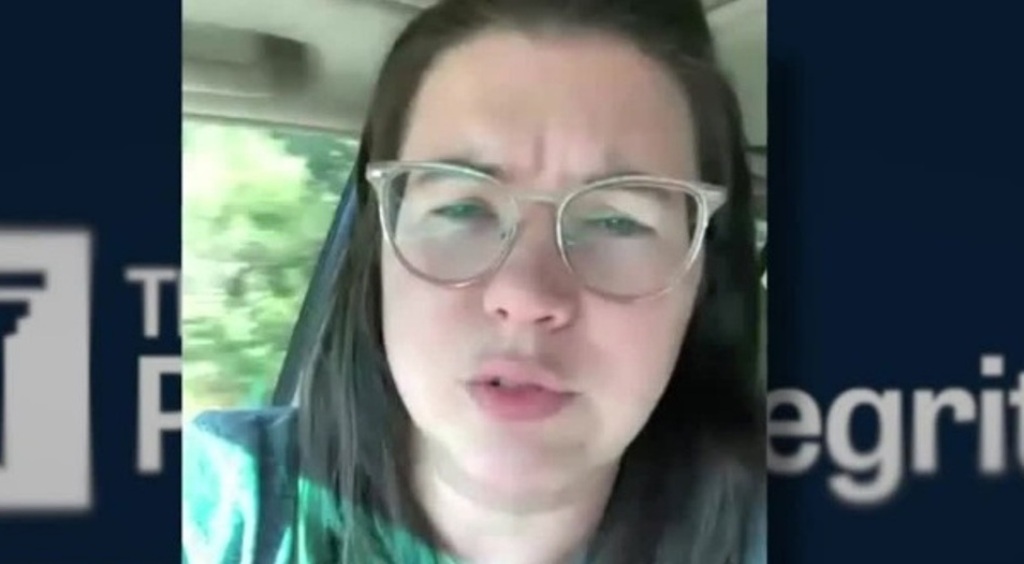 The medical mafia is hard at work among the pharma-influenced left-wing media, and now Natural News has learned that a reporter for The Center for Public Integrity — Liz Essley Whyte — is trolling family members of so-called “anti-vaxxers” to try to dig up dirt to smear them in the liberal media.

This is the kind of mafia-style, terror-invoking “journalism” that might typically be associated with Stalinist Russia or modern-day communist China. The goal, of course, is to terrorize their intended targets (in this case, Ty and Charlene Bollinger) by intimidating family members and ostracizing them from their own family.

The technique also typically involves incentivizing (bribing) family members to fabricate fake accusations to settle old scores. In the email snapshots shown below, notice that the reporter, Liz Essley Whyte, is promising to keep family members’ names off the record — “on background” — as a way to encourage them to anonymously attack their own relatives or settle old scores, should they exist.

The Center for Public Integrity feeds its journo-terrorism stories to NPR, Mother Jones, Daily Beast, AP, WashPost, NYT and USA Today, among other deliberately dishonest propaganda outlets that function as overt shills for the CIA and Big Pharma.

As with all such medical mafia reporters, Liz Whyte pretends to be polite, even as she is carrying out an act of journo-terrorism targeting enemies of the lucrative vaccine industry. There’s little doubt The Center for Public Integrity is indirectly funded by Big Pharma money, as it’s pharma that funds all the news organizations propping up this medical mafia front group that’s parading itself around as a bastion of “integrity,” even when resorting to mafia-style tactics.

Would Liz Essley Whyte enjoy independent media reporters trolling through public records of her own family members and contacting them to dig up dirt on her? That’s a dirty tactic, but apparently there’s nothing off limits for a center that labels itself “public integrity” while using mafia-style tactics to smear intended targets.

Here’s the email Liz Essley Whyte is sending to family members of “anti-vaxxers”: 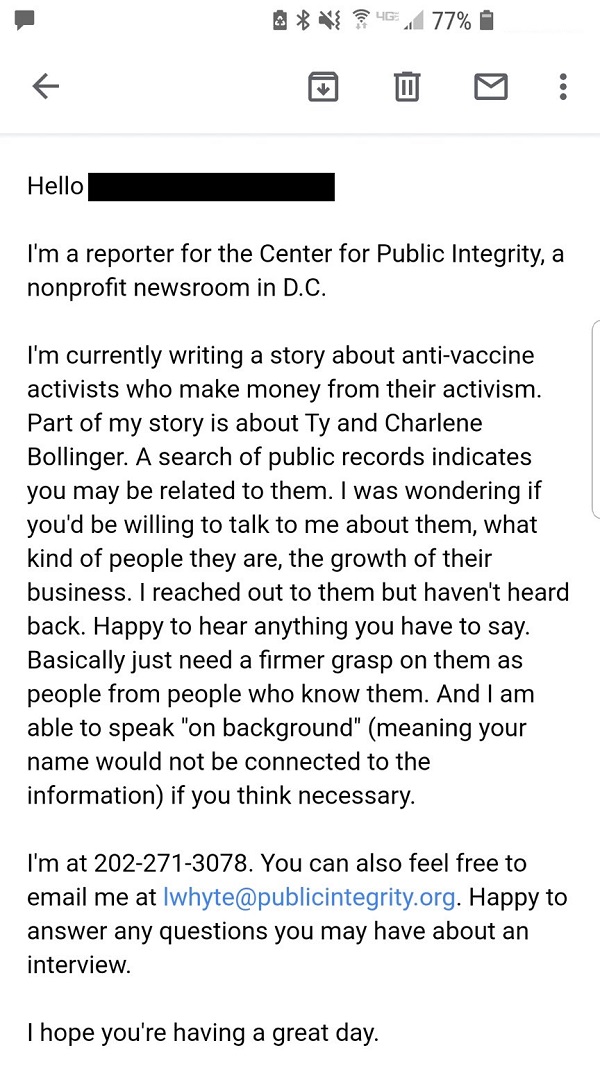 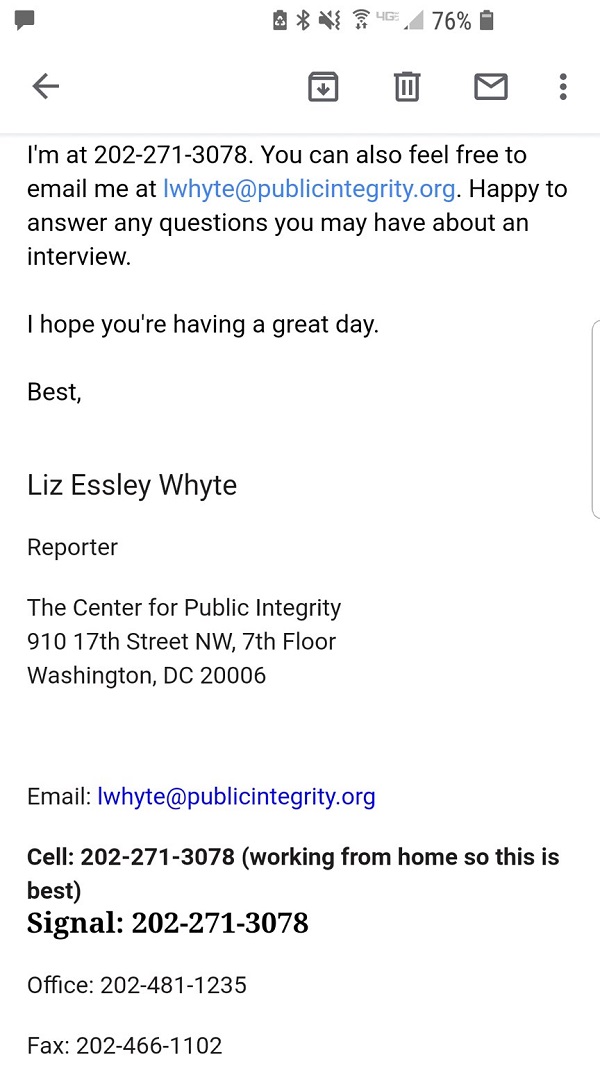 Does Liz Essley Whyte believe it is appropriate for journalists to target family members with psychological terrorism tactics?

It’s time to make Liz Essley Whyte the subject of news stories on the abuses of unethical journalism. We are encouraging all members of the independent media to contact Liz Essley Whyte and ask her questions for your own stories, including questions like:

We reached out to Liz Whyte to ask her these questions, but she has so far offered no reply.

Indy media reporters and journalists can contact Liz Essley Whyte at this email and phone number she is publicly broadcasting to family members of “anti-vaxxers”:

If you wish to file a complaint with The Center for Public Integrity, call them now at:

(You may have to leave a voice mail, as they aren’t currently answering their phones for some reason…)

You may also email:

Medical mafia media collaborators target the powerless, then claim to be “bullied” when called out

No doubt Whyte will now claim she is being “bullied” by this article, even though she’s the queen of editorial harassment herself. As Glenn Greenwald recently wrote, when left-wing media journalists meet any resistance to their wicked, deceptive practices, they suddenly claim to be victims. In fact, Greenwald nails it in this piece: Journalists Attack the Powerless, Then Self-Victimize to Bar Criticisms of Themselves.

Powerful media figures now invoke sexist and racist tropes to cast themselves as so fragile and marginalized that critiques of their work constitute bullying and assault.

…The USA Today reporters went far beyond merely reporting how this fundraising was being conducted. They went so far as to tattle to PayPal and other funding sites on two of those defendants, Joe Biggs and Dominic Pezzola, and then boasted of their success in having their accounts terminated…

Wow, what brave and intrepid journalistic work: speaking truth to power and standing up to major power centers by . . . working as little police officers for tech giants to prevent private citizens from being able to afford criminal lawyers. Clear the shelves for the imminent Pulitzer.

This USA Today article is thus yet another example of journalists at major media outlets abusing their platforms to attack and expose anything other than the real power centers which compose the ruling class and govern the U.S.: the CIA, the FBI, security state agencies, Wall Street, Silicon Valley oligarchs. To the extent these journalists pay attention to those entities at all — and they barely ever do — it is to venerate them and mindlessly disseminate their messaging like stenographers, not investigate them. Investigating people who actually wield real power is hard.

Instead, the primary target of the Trump-era media has become private citizens and people who wield no power, yet who these media outlets believe must have their lives ruined because they have adopted the wrong political ideology. So many corporate journalists now use their huge megaphones to humiliate and wreck the lives of ordinary private citizens who they judge to have bad political opinions (meaning: opinions that deviate from establishment liberalism orthodoxies which these media outlets exist to enforce).

Indeed, The Center for Public Integrity is nothing more than a Pravda-like smear machine taking orders from the vaccine industry to attack the powerless, smear truth-tellers and silence anyone opposed to the Big Pharma vaccine depopulation experiment that’s now being conducted on humanity.

Every genocidal holocaust needs propagandists to help push the lies that lead to mass death, and in 2021, that propagandist appears to be Liz Essley Whyte.

We specifically request that if you contact her, do not threaten or harass her in any way, as we have truth and ethics on our side, so we don’t resort to such tactics used by the medical mafia media like NBC News, Mother Jones and The Center for Public Integrity. The very reason they lie and smear and deceive is because they don’t have the truth on their side.

US Administration Says Soaring Gas Prices Are Good as Americans Can Switch to Electric Cars, Despite That Electric Cars Use the Same as Each Household Having 25 Fridges, Which Would Implode the Grid Not to Mention Massive Fossil Fuel Use 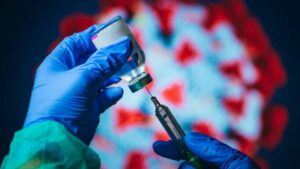