Biden’s ‘Ministry of Truth’ Is Another Propaganda Tool

Biden’s ‘Ministry of Truth’ Is Another Propaganda Tool

The so-called proponents of freedom and democracy have given themselves the right to designate what the ‘truth’ is.

Ian Miles Cheong is a political and cultural commentator. His work has been featured on The Rebel, Penthouse, Human Events, and The Post Millennial.

US President Joe Biden’s Department of Homeland Security announced last week that it had formed a “Disinformation Governance Board” to fight the spread of so-called disinformation on the Internet. While White House spokeswoman Jen Psaki didn’t elaborate on how the bureau would operate, she suggested that it would monitor disinformation on topics like COVID-19 and elections.

Conservatives have often half-joked about George Orwell’s “1984” becoming a reality, but it appears that the Biden administration has decided to literally take a page from the book and create a “Ministry of Truth”.

The board’s aim is to target “disinformation,” but what constitutes disinformation? Many times over the years we have seen complete censorship from government officials and Big Tech social media companies, most infamously during the Hunter Biden laptop scandal, which saw major tech platforms and politicians painting it as “Russian propaganda.”

Allowing the government to dictate what “the truth” is sets a dangerous precedent, as it instead promotes desired narratives to bolster poll numbers, ratings, or nudging the citizenry into following government edicts – all on the basis of “trust us, we know what’s best for you.”

Facts be damned. Just do as you’re told. This was seen multiple times during the pandemic era, when both Dr. Anthony Fauci and then-Surgeon General Jerome Adams hummed and harred over mask-wearing and social distancing – first instructing the public not to wear masks, and then much later calling it a necessity.

Gatekeeping discourse is a surefire way to control the narrative, controlling what people see, what they say, and ultimately – what they believe. It’s also an effective means to silence dissent, and quash those who might speak out against the regime’s approved narrative – or even the regime itself.

The new Ministry of Truth is a tool, and there is no reality in which this tool will not be used for bad intent – and it’ll claim to be doing it all in the name of the greater good.

Unsurprisingly, the Ministry of Truth was rushed into creation seemingly as a reaction to “free speech absolutist” Elon Musk’s purchase of the social media platform, Twitter, the de facto town square of political discourse and public narratives.

With the relinquishment of Twitter to Musk, those who control mainstream narratives fear they will lose out on an important resource, and will no longer be able to promote narratives and fix algorithms to sway public opinion – at least not with ease. There will be pushback, and their positions are not ones they are willing to defend, hence why the creation of this new tool is necessary. It keeps the plebeians in check.

Free speech, which in Musk’s belief is “essential to a functioning democracy,” flies directly in the face of the Biden administration’s attempts to crack down on viewpoints that contradict the regime’s official narrative. And who better to head the Disinformation Governance Board than Nina Jankowicz, who herself perpetuated several regime-approved falsehoods?

Jankowicz, who previously advised the Ukrainian government on disinformation and strategic communications under the auspices of a Fulbright-Clinton Public Policy Fellowship, voiced her support for Christopher Steele, whose infamous “Steele dossier” on Russian election interference during Donald Trump’s 2016 election dogged the presidency for years. Despite Steele’s loss of credibility, Jankowicz hyped up the former spy in August 2020 as being able to offer “some great historical context about the evolution of disinfo” when he spoke on a podcast about the topic.

It’s worth noting that the infamous dossier, which included the unverifiable claim that Russia had “kompromat” on Trump in the form of a sex tape, has since been entirely discredited. Steele’s main source, Igor Danchenko, was later charged with five counts of making false statements to the FBI. Jankowicz also repeated the unproven theory that Hunter Biden’s laptop was the product of a Russian disinformation campaign, spread by members of the Trump campaign.

“Back on the ‘laptop from hell,’ apparently—Biden notes 50 former natsec officials and 5 former CIA heads that believe the laptop is a Russian influence op,” Jankowicz said on Twitter. “Trump says ‘Russia, Russia, Russia.’”

She attempted to distance herself from her remarks with the claim that she was simply livetweeting Trump’s first presidential debate with Biden. However, when solicited by the Associated Press in October 2020 for her thoughts on the laptop, Jankowicz told the publication that “We should view it as a Trump campaign product,” dismissing the fact that the laptop belonged to Hunter Biden.

As detailed by Newsweek, Jankowicz continued to perpetuate doubt against the story, tweeting on October 22, 2020 that “The emails don’t need to be altered to be part of an influence campaign. Voters deserve that context, not a [fairy] tale about a laptop repair shop.”

In a consolidated effort to disqualify the New York Post’s original report on Hunter Biden’s laptop as “disinformation”, Twitter, Facebook, and other social media platforms banned the New York Post and prevented its users from sharing the story weeks ahead of the 2020 US presidential election. The original report on the laptop has since been validated by a comprehensive report about the ongoing federal probe into Hunter Biden’s tax filings, published by the New York Times.

Twitter’s then-CEO Jack Dorsey later admitted to a Senate Judiciary Committee hearing that censoring the report was a “total mistake,” and chalked up the decision to a “process error.”

Both Twitter and Facebook heads were grilled over their companies’ perceived anti-conservative bias and penchant for censoring so-called “disinformation,” with the censorship usually aimed at conservatives. It’s worth pointing out again that the now-discredited “Steele dossier” had no problem gaining traction when it first ran on BuzzFeed.

Nina Jankowicz had no problem spreading actual disinformation while helping to silence the truth under the auspices of “combating disinformation.” Given her predilection towards perpetuating anti-Russian narratives, one might ask if contradictory evidence to the “Snake Island” and “Ghost of Kiev” hoaxes constitute forms of “disinformation” in her book. After all, the mainstream media is chiefly responsible for promoting these heroic war stories, both of which were almost immediately discredited by the Russian media – and later by western experts. Even Ukraine’s own propagandists were forced to instruct the public to stop promoting disinformation about the conflict. Would the Ministry of Truth move to silence such attacks on its credibility?

Those concerned with the truth must do everything in their power to resist the Biden administration’s efforts to police the truth. To that end, Florida Gov. Ron DeSantis is one of the few American leaders who has stepped up and vowed to fight back against the Orwellian disinformation bureau.

“They want to be able to put out false narratives without people being able to speak out and fight back,” DeSantis said. “But we’re not going to let Biden get away with this one, so we will be fighting back.” Referring to the regime as a “decaying and discredited ruling elite in this country,” DeSantis said: “We believe it’s essential that individual Floridians and Americans are able to speak out against the false narratives trying to be jammed down our throats by this regime.” 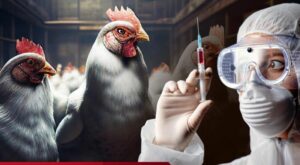