The Offence of Contempt of Court in New South Wales

By Paul Gregoire and Ugur Nedim

Kangaroo Court of Australia blogger Shane Dowling was sentenced to a term of imprisonment after being found guilty of the common law offence of contempt of court.

The serial contempt offender was given ten months inside to act as a deterrence to him and other would-be contemners.

NSW Supreme Court Justice Kelly Rees sentenced Dowling last Friday, in relation to this fourth time in which he’s been found guilty of contempt of court.

On 14 April 2017, Dowling sent an email to Seven directors and solicitors disclosing confidential information. The blogger then went on to post his email on Twitter three days later. And he also published a blog on an anonymised website disclosing the information.

The plaintiffs’ solicitor sent an email to Dowling requiring the removal of the tweet, which he complied with. And an email was sent to the anonymous website requiring the blog be removed, but no reply was received, and the blog remained online.

An order restraining the website publisher from continuing to disclose the information was sought from the Equity Division of the Supreme Court. The order was granted and was subsequently emailed to the website, although there was no acknowledgement of receipt and the post remained.

This was the contempt of court that Dowling was later charged over and found guilty of in June this year.

On 22 April 2017, the blogger continued to tweet further information considered in breach of the order, although he maintains he never received the documentation, despite Seven’s solicitor having emailed it to him personally.

The plaintiffs complained to the World Intellectual Property Organisation about the anonymous website. WIPO concluded Dowling owned the site and ordered the domain name be transferred to Seven.

As Justice Rees explained in her 3 September sentencing transcript, contempt of court is a common law offence, so the penalty is at large, which means no maximum applies. Although, under the Bill of Rights 1688 (UK), there is a restriction against cruel punishments being imposed.

Section 55.13 of the Supreme Court Rules 1970 (NSW) outlines that when a contemner is not a corporation, the court “may punish contempt by committal to a correctional centre or fine or both”. It also leaves it open for the court to suspend punishment in relation to good behaviour.

The Supreme Court Rules also permit for an arrest warrant to be issued in relation to a contemner, under section 55.2.

However, if an individual is found guilty of contempt of court in the lower courts there is a maximum penalty that applies.

Contempt of court powers are found in section 199 of the District Court Act 1973 (NSW) and section 24 of the Local Court Act 2007 (NSW). These sections provide for the issuing of an arrest warrant in relation to contempt and see maximums set at 28 days imprisonment and/or a $2,200 fine.

Dowling has been found guilty of contempt of court on three prior occasions. In 2014, plaintiffs commenced defamation hearings against him in respect of material he’d published about them, and a suppression order was issued to prevent further publications on these matters.

However, Dowling continued to post further blogs about these individuals, as well as an article criticising the findings of the defamation case. And on returning to court to face contempt, the blogger was found guilty and fined $2,000, which he later bragged about not having paid.

In 2016, Dowling appeared in court in relation to the Doe versus Dowling defamation case, concerning his having published the names of two women he claimed had had an affair with a Seven executive. Yet, Dowling failed to remove the offending material once asked and he published more.

Justice Ian Harrison found Dowling guilty of contempt of court. On sentencing, his Honour said the blogger’s behaviour had a tendency to frustrate the court and potentially intimidate the plaintiffs. And the justice sentenced him to four months in prison.

Dowling’s third prosecution came in 2017. It related to his having loudly and aggressively called the court registrar a bribe taker and a paedophile during the Doe proceedings.

And despite a suppression order, he then published an audio recording of the hearing and an article about his accusations.

Justice Helen Wilson found Dowling guilty on 29 May 2017. And on sentencing him in August 2018, her Honour found “there was no acknowledgement of wrongdoing”, and imposed an 18 month sentence, with a non-parole period of 13 months. But this was reduced to 4 months on appeal.

Severity to match the crime

Justice Rees pointed out that in January this year Dowling had published an article about her claiming the NSW Chief Justice had ordered her to sentence him to prison time over the current case.

“The contempt was of a serious kind,” her Honour said in relation to the Seven matter. “The underlying proceedings were concerned with the protection of confidential information belonging to the plaintiffs.”

And Justice Rees added that despite the orders, Dowling didn’t remove the article and went on to publish it again.

The justice set out that the crime was exacerbated by its anonymous nature, and much of the evidence was found on Dowling’s hard drive. Two benefits for the offender that could be surmised by his actions were a desire to harm the plaintiffs and to promote his own website.

Her Honour further found that the repetition of the crime and the ongoing nature of the current offence warranted more severe punishment.

“The remedy must be effective… to reinforce the important principle underpinning the rule of law in our society: orders made by the courts reflect the application of the law by which all are governed and which orders must be obeyed while they are in force,” her Honour made clear.

On 3 September, Justice Rees sentenced Dowling to a fixed term of 10 months in prison. Her Honour also explained that she’d ordered him to pay the plaintiffs’ costs, but she wasn’t confident that he would do so.

Dowling did not appear in court for his sentencing. And on Monday, he published a video on YouTube, in which he appeared from Queensland, explaining that a warrant has been issued for his arrest, and that he’s published an article on the current matter.

“I was never going to get a fair trial in NSW. I was actually run out of the state because the court made some complaints to the police – frivolous and vexatious,” Dowling said. “So, I needed to move out of NSW.” 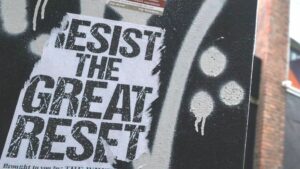